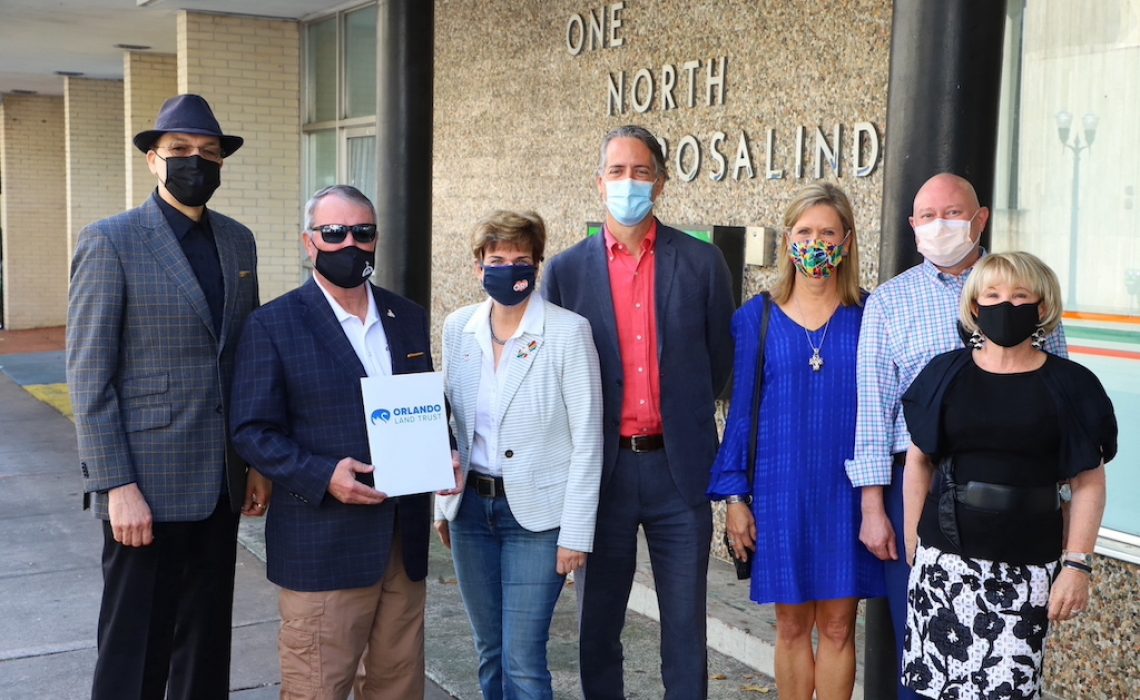 ORLANDO, FLA.  – Tuesday, March 23, 2021 – A grassroots effort launched 18 months ago by two self-described “little old ladies” who sought to protect green space at Lake Eola Park has reached its fundraising goals which resulted today in the donation of an important land parcel to the City of Orlando’s Community Redevelopment Agency (CRA).

The Orlando Land Trust, organized by Orlando natives Lynn Long and Eugenia Sefcik, along with Ted Haddock, sought to raise $3.25 million dollars to purchase land at the corner of Rosalind Avenue and Central Boulevard, currently the site of a convenience store. Their goal has been to purchase the property and donate it to the City of Orlando’s CRA with a requirement that it is to remain a park and open green space.

An out of state developer was planning to build a 28-story, mixed-use, high-rise complex on the site and the women feared the character of Lake Eola Park would be destroyed. After several efforts to thwart the project, they formed a non-profit solely to raise funds and buy the land from owner Robert Murrell, who appreciated their preference for green space over a high-rise.

“We joke that we’re just a couple of old ladies who knew little about a project of this magnitude. The reality is we are quick learners and hard workers who have a passion for preserving the integrity of our downtown” Lynn Long explained. “We had no clue how intensive this would be, especially during a pandemic, but we had a lot of help from the community and we are grateful that so many people, most especially the City, believed in our mission. That was the key.”

“I have great respect and gratitude to Lynn and Eugenia for not only their dedicated efforts to secure this key piece of land near our Lake Eola Park, but also for their vision to gift this to the city and allow us to incorporate it into future green space, giving us the opportunity to expand the amenities of our crown jewel park for future generations to come and enjoy,” said Orlando Mayor Buddy Dyer.

Support for their endeavor was almost immediate. They partnered with the Trust for Public Land (TPL) whose mission is to protect land, acquire property for public space and create more public green space and parks across the country. TPL served as the purchaser until OLT was able to obtain their 501 (C )(3) and raise the funds for the purchase.

Long and Sefcik immediately began a community awareness campaign to raise money by organizing small fundraisers throughout Central Florida. However, like so many other projects, the effort was temporarily disrupted due to the impact of the COVID-19 virus. When Long and Sefcik started appealing to fellow grandmothers with a message about creating a legacy for their grandchildren, the campaign took off again. In addition, in an effort to reach downtown residents, they hand addressed materials explaining the project to 4,000 current residents. These initiatives increased awareness of the project and as a result, contributions rapidly came in ultimately pushing them across the goal line.

“As grandmas, we knew grandmothers would do anything for their grandchildren and we were right. So many grew up with Lake Eola and still visit it today so there is a huge support for preserving the park which truly is the heart of our wonderful city,” said Sefcik.

“We have said all along, that this issue is about protecting the quality of life we all enjoy here in Orlando. Cities are living breathing things, and while growth is important, so is protecting the city’s heart and soul,” Long noted.